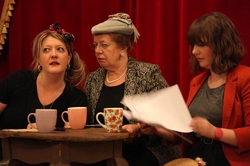 Bricks and Buns had a rehearsed reading at the Horse & Stables with Artists Anonymous in March 2015, with Donella Fox as Kate Frye, Carrie Cohen as Susan Baxter and Katie Pritchard as Amy Foxdale. Three suffragettes discuss the best course of action in a tea shop.
Directed by Tessa Hart. 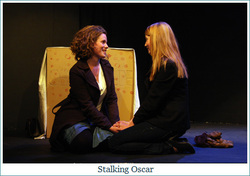 Stalking Oscar was produced at the cornerHOUSE in Surbiton as part of oneACTS 2008. Set in Pére Lachaise, this was a quirky look at love and obsession among the gravestones. Directed by Daniel Kedge.

Edge of Blue had a rehearsed reading at Jacksons Lane, Highgate in 2010 with Anna Brook (Maria), Matt Prendergast (Will) and Smith Lowe (James). A dark three-hander, and lightning struck that night in north London at just the right moment...